As we see it
Looking from above, it looks like a dentelated fjord, but if you come closer, Meganisi is a small green art of nature in the middle of the Ionian Sea. It is the biggest of the islands of the the Prigipoinisia LEFKADAS and that’s why it got the name of Meganisi.
Relaxing destination for those who love the combination of natural and cosmopolitan beauty, which explains the reason of being chosen by the Greek jet set and mainly for those who prefer a low and distinct profile.
In Meganisi the phrase crystal waters finds its real meaning. The visitor feels like floating between the surface and the depth of the waters that one can clearly see even without diving equipment.
The beaches few and slightly organized “bring” the simplicity of the island. The citizens love their hometown and protect it from the uncontrolled construction and the bad connotation of tourism in a way that nothing seems like ordinary.
However, everything is there!! Traditional taverns for all tastes, all day cafes and bars in their own style for “light” or ‘heavier” entertainment. Ideal destination for families ,couples, and friends or for sailing holidays in one of the magnificent bays or rooms for rent.

In the ancient years Meganisi was known with the name Taphos or Taphias. It was probably
named after the first king of the island Taphios who, along with his brother Tilevoas, were the children of the God Poseidon.The first inhabitants were called Leleges and Tilevoes, ancient tribes of the opposite land of Akarnania.

Keen navigators as well as pirates, the islanders took part in the Trojan War with forty ships,
according to references by Homer in Iliada.
Taphias was such a significant marine force that both Virgilios and Souitonios report that the
ancient island of Capria (today Capri in Italy) was a Taphian colony.
In the 7th century BC, after a dispute between the two great powers of the times (Cephalonia
and Lefkada) and due to its strategic position in the Ionian Sea, Meganisi gets under the
influence of Corinthos.Today’s villages are the evolution of the first settlements that were gradually created after the imposition of the Venecians in the area.
During the Greek revolution of 1821, Meganisi as all the Ionian islands provides shelter to lots of civilians as well as heroes such as Karaiskakis, Kolokotronis , Androutsos and actively participates with its own forces in the national cause. What’s more, the local hero Dimotselios turned out to be one of the leading figures of the fights in Roumeli.
In the course of time, the fate of the island follows that of the rest of Eptanisa and is finally embodied in Greece on 21 May 1864.

Though an island, the access to Meganisi is mainly a driving case, as it is just 4 nautical miles from Nydri, Lefkada. Firstly, the visitor must arrive at the town of Lefkada something that can be done in a number of ways.

How to reach Lefkada

From Athens (385km) via the national high way of Athens‐ Patra, crossing the hanging bridge of Rio‐Antirio and the provincional road of Etoloakarnania the visitor is led to the moving bridge of the island.
From Thessaloniki (420 km) via the Egnatia Road with direction to Ioannina and then Lefkada.
From Corfu you get to the port of Igoumenitsa which is a two hour drive from Lefkada (100Km).
It is very easily accessible for those travelling by car from Italy to the ports of Igoumenitsa and Patra.
From the Balkan countries, via Egnatia road with direction to Ioannina and then towards Lefkada.
Buses connect Lefkada with Athens and Patras on a daily basis and twice a week with Thessalloniki.
There is air connection with charter flights from most European countries to the airport of Aktion which is 16 km away from Lefkada.
Arriving at the town of Lefkada the visitor can travel 20 minutes south n a green landscape to arrive at Nydri (16 km) which is also accessible to ferries from Cephalllonia and Ithaki.
As already stated, ferries with direction Meganisi depart from Nydri. It is a 25minute journey with green landscapes, blue waters and many small islands that surround Meganisi. Among them, Mardouri with its imposing mansion of our national poet Aristotele Valaoriti and of course the Scorpios island which is still considered Onasis property by the locals.
Timetables for ferries are regular and reach both ports, Spilia and Vathi . Either with local buses or taxi the visitor can be transported to the villages of the island.
Finally, for those wishing, there is a sea taxi from Nydri to Meganisi.

Do you need to have Hotel / Resort template?
Purchase this template

The Villa Lydia is located at Vathy Meganisi, in a green hill you complex of stone houses, with beautiful views of the Scorpio. 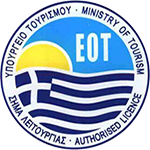